Mappers of the Month: Josefien & Ruben 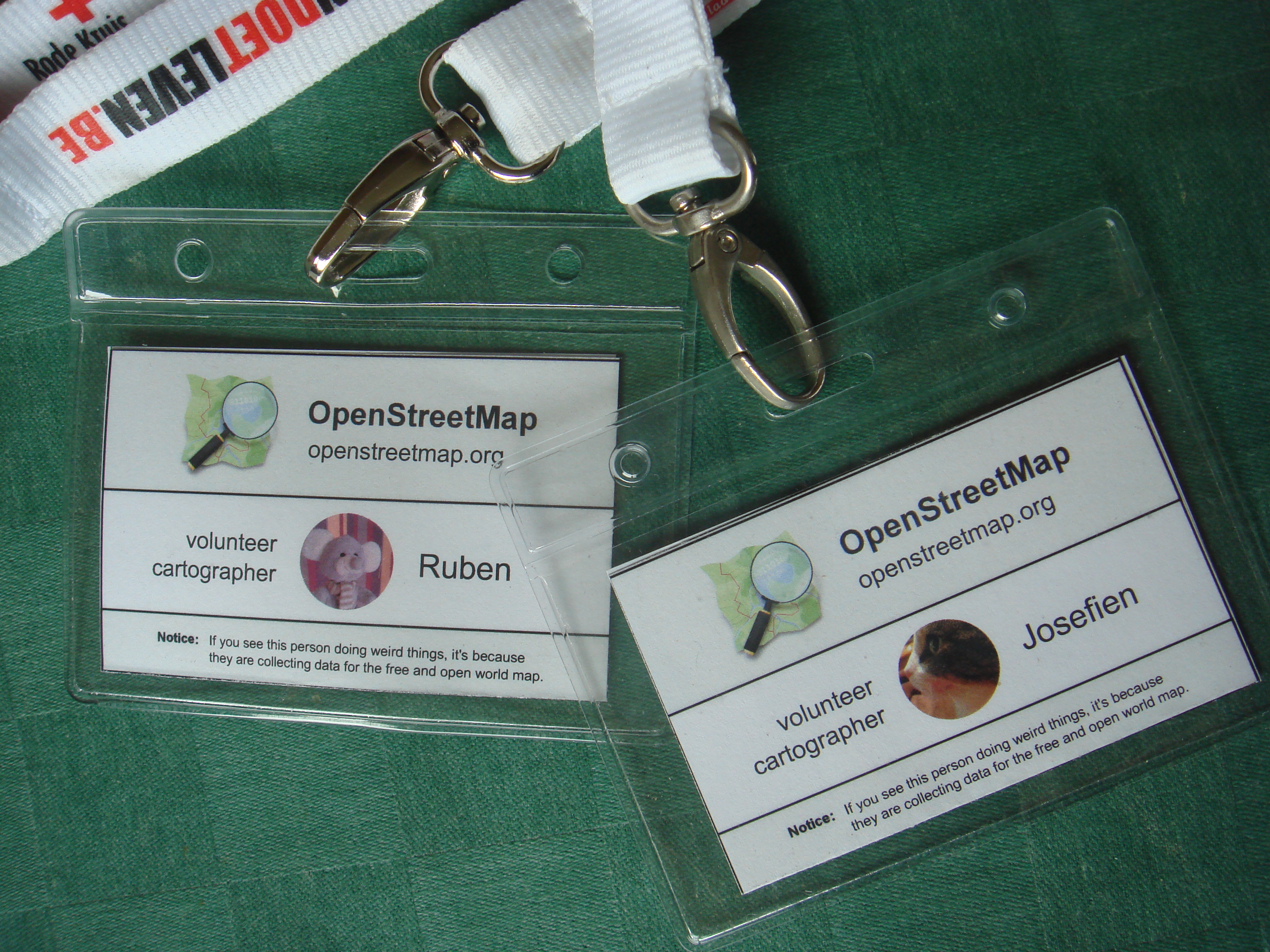 Josefien and Ruben (M!dgard) are 20 and 19 years old. Between their mapping activities, they are going to college. In high school, they were best mates; and now they walk the streets of Blankenberge and neighbouring villages with their self-made OpenStreetMap badge. Ruben is more interested in the technical aspects, while Josefien spends her free time to design and make two OpenStreetMap T-shirts to wear during their surveys. They love to help others, e.g. they give blood plasma every two weeks in Ghent.

How and when did you Learn about OpenStreetMap?

Ruben: In 2012 I looked at Google Maps and saw that a path in my neighbourhood was mapped incorrectly. I decided to change it with the new Map Maker. Unfortunately, the change only became visible months later. My dad had heard of OpenStreetMap and thought I would enjoy it more. So I browsed to openstreetmap.org, and shortly after that I had made an account.

Jose: Ruben loves to tell about his computer stuff. This time it was different, it was not only something I could do, but we could also do it together.

Do you use OpenStreetMap?

Ruben: Yes, when we need to lookup a street or an address, we usually first look at OpenStreetMap. Jose: And when it is not yet on OSM, we map it ourselves.

Ruben: I map all kinds of different things, new buildings and their addresses, as well as correcting errors reported by Keepright or Osmose. I also experiment with 3D-tagging. I have never done a lot of surveys, although I put a lot of things on the map that I encounter. So, I am not a pure armchair mapper, but also not the most active surveyor.

Jose: Last year we did a real survey, but without GPS. We gathered all POIs in the Kerkstraat in Blankenberge by writing them down on paper.

Jose: At the moment I still have a lot of work with my hometown, which is not well mapped. That is also easy, if I want to know how the reality is, I jump on my bicycle and have a look.

Ruben: I wish that I could mapped so organized as her. I do not work with any system. But I mainly map what I saw in the real world, so I know I map it correctly. I always take notes of interesting features, whether it is in Belgium, or abroad, e.g. during a holiday.

What do you map? Do you specialise in something?

Jose: Mailboxes are one of my favorite features. Because I love to send letters, I remember their location anyway. We also map defibrillators, mainly because they can save lives. We also map the opening hours of the building on the defibrillators, so you will not end up at one that is inaccessible.

Ruben: I map a lot of different items. I enjoy mapping turn lanes, but I wished there would be more maps that show them. 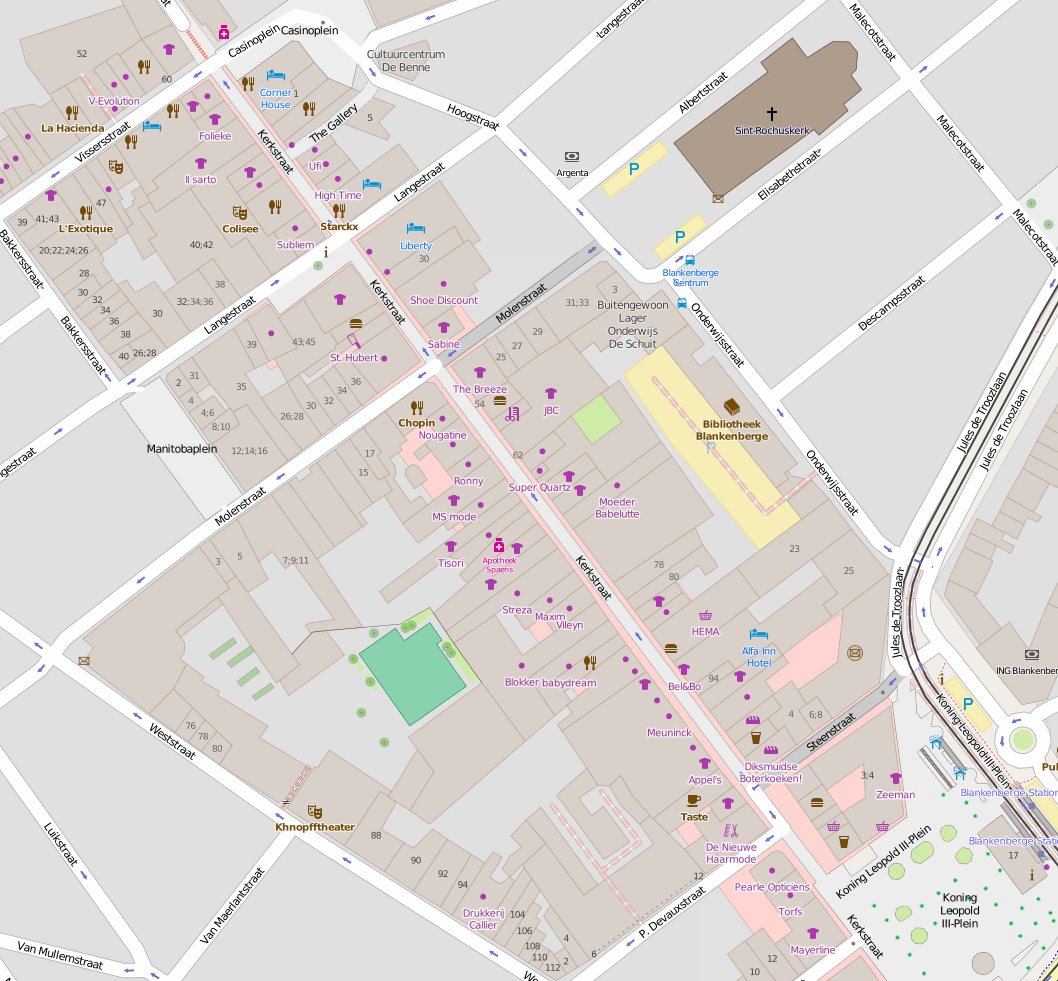 Jose: Like most people, I often pass the time by clicking around on the web. With OpenStreetMap, I now found something to spend that time more useful. Although I have to admit that it is also an excuse not to work for school. It is also very motivating that Ruben likes it when I am mapping stuff and that he encourages me to go out and survey a bit.

Ruben: I believe in open and free data. That is why I contribute to a map based on those principles and help the project to be usable and accessible for everyone. O yes, and often times it is just procrastination. (laughs)

Do you do other things concerning OSM?

Ruben: Translating the editor iD is something that I find important. Not just quickly to be done with it, but accurately to provide new mappers with a tool that lets them map precisely what they intend. A confusing or incoherent translation, like an inconsistent terminology, can scare new users quickly. That is why I have translated a great deal of iD into Dutch. In February I completed the translation.

Jose: That was also useful for me, because I used iD for its simplicity. Nowadays I use JOSM because that is of course much more powerful.

Ruben: Making links between OpenStreetMap and Wikidata is interesting as well. Instead of tagging the name of a Wikipedia article, you can tag the Wikidata id for the feature. Not only does this associate all of the Wikipedia articles at once with the OSM object, it also provides machine readable information.

Jose: That all users are a part of the community and the fact that every little change, each node you edit, is a step forwards to something Ruben and I really support. It’s just great fun to try and map all of Belgium and we want to help, as much as possible.

Ruben: I think it’s great that the data can be used virtually without limitations, and that everyone can help out, from teenagers to multinationals.

What are your ideas about expanding the OpenStreetMap community?

Jose: When Ruben told me that I am one of the few mapping girls, I was a little bit surprised. I had not expected a female majority, but apparently there are really few. I think prejudices also play a role here. A lot of women have an eye for detail and I think that more would be willing to map if only the project was better known. The technical aspect of mapping is boyish and the subject in itself as well, so it is simply not as easily found by women. I have shown it to a lot of girlfriends and every time I make a map for whatever event I use OSM. So far it has not got OSM any new (female) members.

Ruben: OpenStreetMap should be more famous in Belgium. British friends of Jose had used OpenStreetMap already. A showcase website sporting beautiful maps and showing other possibilities of OpenStreetMap would make a great tool to show other people why we are spending our time on this.

Do you have any ideas to take OSM to the next level?

Jose: I would like that for every newbie there is someone who gives them feedback when they create their first node. The fact that Ruben could give me hints and answer my questions, was invaluable. A lot of people could make it through the first crucial moments in iD if there were some sort of system to let more experienced mappers help a new person. There should be a better communication between mappers as well. Contacting others is not straightforward and unaccessible for people who are unfamiliar with web pages and wikis. Any kind of mentorship would be a big step forwards. Even I could already help some people with putting their first objects on the map.

Ruben: That is a great idea. Of course that asks for a lot of dedication and effort from experienced mappers but after a while we would see more people staying active in the project. Many make just a few changesets and subsequently forget about their account. A good and informative portal, that is referenced when you are mapping, could already make a difference. A second point is the need for a good, clickable slippy map. OpenLinkMap is a wonderful initiative, but we I am convinced that we can do better. Friends to whom I show that website are not impressed, because it does not look as good as Google Maps. People are picky about the look of websites these days …

How do you stay on top of news about OpenStreetMap?

Jose: Ruben tells me, of course. He reads about all new stuff he encounters and is on several mailinglists.

Ruben: The talk-be, talk and tagging, but I only read talk-be, and not that often. There are a lot of mails and I have other things to do as well.

Jose: Not so much. Only Ruben and one of his friends who joined recently. Ruben: Yes, when I told my friends that I was nominated for this interview, one of them promptly made an account, that is funny. He promised to map all nice venues he knows in Ghent.

Jose: That is something we can only encourage!

Ruben: In my early days, when I used Potlach 2, I was contacted by someone because I had made an error. He guided me a bit, for which I am still grateful. Meanwhile I have sent messages to others myself. Other than that, I do not have a lot of contact with fellow mappers.

Ruben: Like my great grandfather always says: the only good disease that I know of, is OCOSMD! (Obsessive Compulsive Open Street Mapping Disorder, editor’s note)