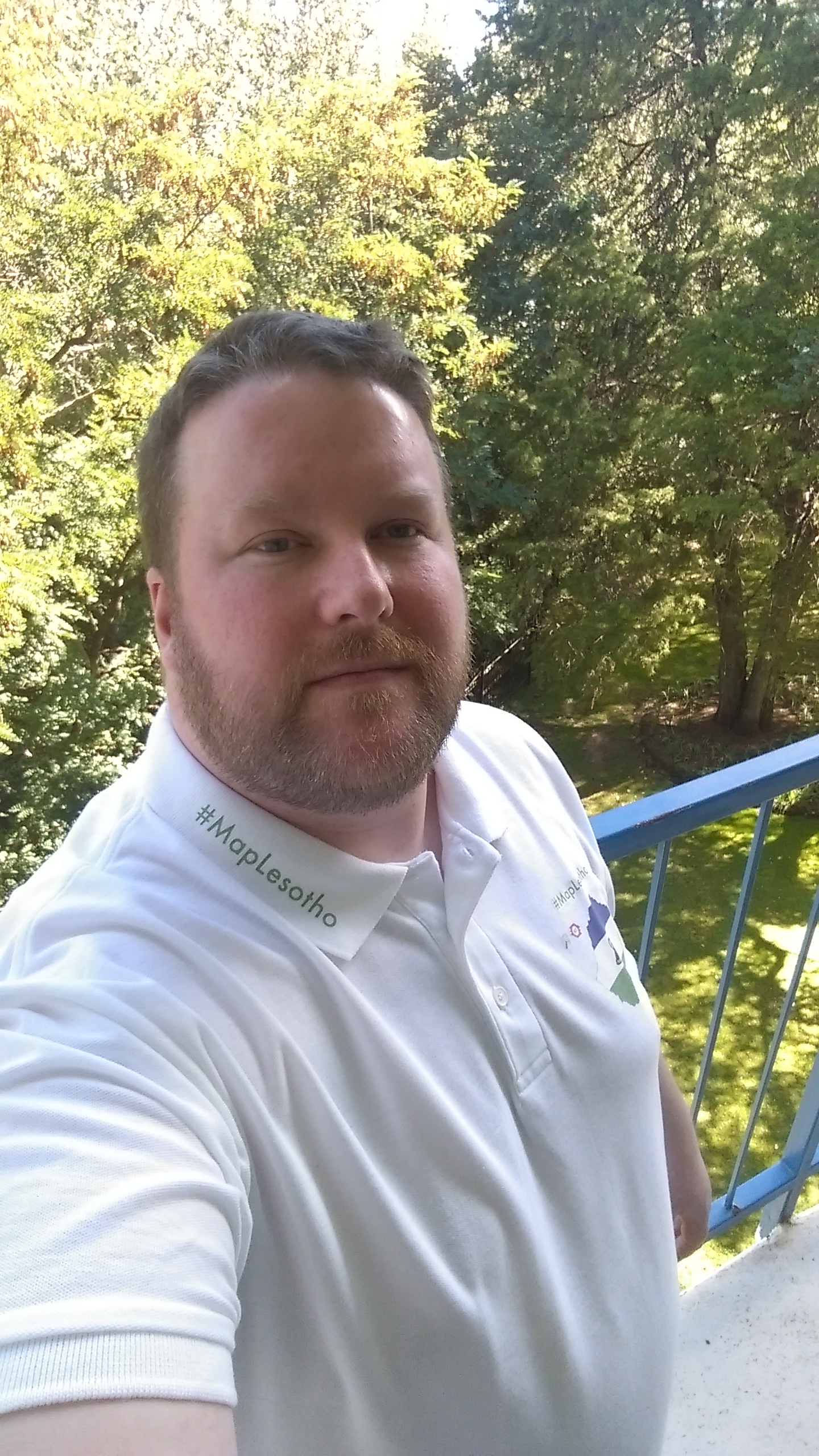 I first saw DaCor’s avatar on the help-site, where he gave friendly and detailed answers. Later on, I saw him doing the same on the Irish mailing list. After seeing Jo Walsh’s presentation (video) in which he is mentioned at the end, I knew I would love to interview him.

Hi, I’m Dave Corley, from Ireland. My day job is in Quality Engineering in the medical device sector, specifically in the field of Interventional Cardiology. It’s a role I had never planned on going into but one which I really enjoy as no 2 days are ever the same. It’s given me the chance to learn many new skills over the years from project management to problem solving to developing new processes. In a nutshell, my job is to look at problems, use data to break them down into their smallest parts to find causes and implement the simplest solutions.

I would have to say OSM is my main hobby. When I have it, it pretty much soaks up all my free time.

When/how did you discover OpenStreetMap?

I became aware of OSM back in 2011, can’t recall exactly what it was that brought it to my attention but I became more and more interested in it the more I learned. At the end of 2011 I picked up a decent smartphone with GPS and started mapping with gusto.

Very early on (in the first day or two) I was having a lot of trouble with connecting the dots (how do I collect a trace + what do I do with it + where is the info on how to do these things) and got directed to the Irish OSM chatroom where the folks there were very patient and answered every single question I had.

The biggest benefit of this was it kept me engaged at a critical time i.e. right at the beginning. If it wasn’t for the help I received those first few days I likely would have walked away out of sheer frustration.

I will map just about anything. Same as most, I started with roads and local POI’s but then moved on to addressing in a big way. Many people knock addressing but to be honest I can’t think of a better way to survey every square inch of an area. Only through addressing have I gone down every street, walked around every corner and gone to the very last house in housing estates. Yes it can be tedious but this is a marathon, not a sprint. All I can say is do it for a few hours on a single day and you’ll be amazed at what you would otherwise never find.

Due to work commitments now, I have little free time at the moment so I find these days a lot of my mapping is centred around QA and reviewing newbie edits and notes.

“Armchair mapper”, I have always hated that term. OSM would be never more than a niche pastime for a few select geeks if it was not for imagery and people making use of that imagery en masse. That being said, I do both, I survey and I do a lot of imagery tracing.

I’m a JOSM user at heart though I do dip into iD every now and then. It depends; I use whatever will get the job done.

When it comes to surveys, the one thing I always try to do is make sure and map as much detail as possible beforehand. When I’m out surveying, I survey, I don’t map, so having all buildings, roads and other features mapped ahead of time makes data collection that much more efficient.

In terms of apps, I would use the following:

OSMTracker - My go-to app when driving. I use it to collect voice notes and photos mainly, but its presets are very useful.

KeypadMapper - Another go-to app, this time for address mapping. You can rapidly collect addresses at a walking pace

Mapillary - Create an open-licenced streetview of the area you are surveying. Very useful if you need to refer back to something without having to revisit the area again. This is a great one to leave running in the car when you are driving around. You’ll collect thousands of images without much effort which are of benefit to everyone, not just you.

Maps.me - Free, offline maps. Useful to have no matter what

Vespucci - Mobile editor, useful for doing all sorts of mapping on the go. Your edits upload direct to OSM. For the folks who prefer editing while surveying, this is the app of choice

Same as most, I started local, but have done a lot on a national level too. I’ve participated in a number of HOT activations over the years.

There are 2 things I am particularly proud of being involved with, the first being the Irish Townland Mapping Project and the second, #MapLesotho.

Back in Oct 2014, when I was out of work for an extended period with a back injury, I decided to get involved in an ongoing project among the Irish OSM community where we were rectifying out of copyright maps and using them to trace townland boundaries. A townland is the smallest admin boundary in Ireland and they date back nearly 1,000 years. They are the base boundary for all others in Ireland, admin, historical or otherwise.

The process, from start to finish to add just a single boundary goes something like this Identify the correct map sheet

In addition, everything to do with this process used multiple tools and websites, each of which served a specific purpose. All in all it is an insanely convoluted process but there is no other way to do it as this data is locked up tight under government licence (but that is hopefully changing soon).

I started mapping them but then decided to create a wiki page, workflow and series of videos on the whole process as much for myself as anyone else. I knew if I went away and came back I’d forget steps of the process but I hoped it would encourage others to take part in the process too but I wasn’t too hopeful.

Everything was released in Sep/Oct 2014 and there was a massive (by Irish OSM levels) increase in the volume of people mapping and townlands being added almost straight away and it has continued to this day. I’ve included a few graphs below to give an indication. Townland New Mappers

There are over 60,000 townlands to be mapped, but we are well on the way to finishing all boundaries by summer 2016 which is a heck of a lot better than the original when we were on track to finish in 2025. Townland Mapped vs. Target

Back in March 2014 I got involved (through a twitter conversation) with a Fingal County Council initiative that came about after a MOU was signed to assist with infrastructure and urban planning activities in Lesotho. From this, grew #MapLesotho, a collaborative effort to provide a definitive map of Lesotho. MapLesotho Logo

By utilising the HOT tasking Manager and using international mapathons, Irish schools and locals on the ground, we’ve taken it from 50,000 nodes of data to over 7 million. Support has come from many sectors most notably from the private sector in the form of a recent competition sponsored by Mapillary which drove a huge amount of mapping from locals.

The progress of #MapLesotho has been mindblowing to say the least and really has been a fantastic team effort. I was lucky enough to go there in Feb 2015 for 2 weeks training local government planners how to use JOSM and other tools. We were lucky to have one of those techy/data guru guys in Colin Broderick (twitter.com/rusty1052) who gave indepth training on QGIS and other tools and Ciaran Staunton (twitter.com/ciaranstaunton) who put the 2 weeks together and has been both the glue holding it all together and the engine driving it on. Soren Johannessen (https://twitter.com/neogeografen) has been great too, posting weekly progress updates on #MapLesotho since June 2014.

We’re all off there again in Feb 2016 where the training will move from “get the basemap done” to QA and developing the base map.

Simply put, I like data and OSM gives me lots of it to play with.

The Irish OSM gang are a great group of folks. We’ve had a couple of meetups though not as many as we should and we’re fairly active in IRC, Facebook, Twitter etc.

Whenever I go anywhere new I always have something like OsmAnd running as much for QA (see if there’s any turn restrictions etc missing) as out of pride. I love that the little map being displayed was made by a load of people I know personally.

I’m as active as I can be in the Irish Open Data / Open Government scene and we’ve had collaborative sessions with Open Knowledge Ireland on trying to utilise health data released by the Irish government……there’s a long way to go in Ireland in the Open Data field but I’m hugely optimistic for where this is going.

Over the last 2 years I’ve been into colleges and schools teaching people how to map or use OSM for various purposes.

Thanks a lot for this interesting interview. It is really appreciated that you took the time, although you were very busy the past few weeks.