Mapper of the Month: Sus Verhoeven

Sus is my computer related nickname, on OpenStreetmap I use susvhv. In the early days of the PCs I always had problems with the ç of François, my real name (smiles). I was born in 1933, (I leave it to you to calculate my age) in Brussels and I was a technician at the Belgian Nuclear Research Center or SCK in Mol, where I live at the moment. I was sent on early retirement during a restructuring at the SCK. I have been enjoying home life for over 25 years since that moment. When I went to school, there were no computers. Luckily, I got the opportunity at work to spend time to learn about hardware and software and get familiar with microprocessors and microcontrollers. Until now, I have bought all my desktop computers as parts and assembled them myself. The last one runs Ubuntu. My laptop runs Windows 10. Unlike the desktops, I buy my laptops. 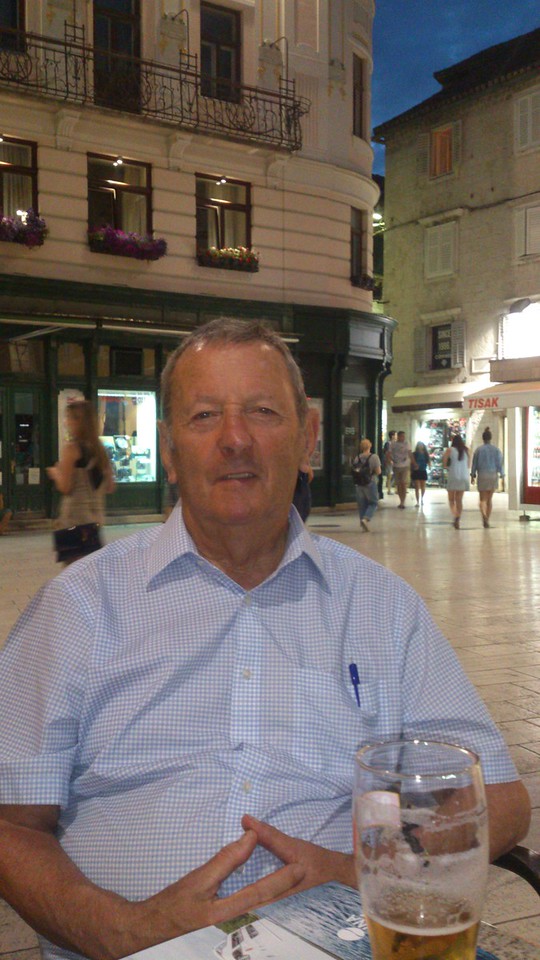 The hardware for the development for microprocessors we used at work was very expensive in the early days. A few years after my retirement, I noticed that a microcontroller, such as the ATMEGA8 costed only a few euros and they were freely programmable from the serial port (now from USB) of a PC. Today, in the Internet of Things area, one can program Arduino computers with Wifi modules (Nodemcu, ESP8266) to control all kinds of peripherals. I have one running that measures the temperature in the veranda and sends the data to the net, from where I can read it. I also have a 1 terabyte Owncloud server running on a Raspberry Pi. You know, those bankcard-sized computers developed for children (smiles)

Where and when did you learn about OpenStreetMap?

My history as a pilot of ULM aircrafts, rally driver, hiker and geocacher brought me in contact with all kinds of maps and made me see the usefulness of GPS systems. Those systems requires maps, preferably free maps. I have an OpenStreetMap account since 2008, but I was using the maps already before that time. There were plenty of empty areas on the map back then. I only started mapping in 2011. The initial hesitation was big, especially because I was doing it on my own. Accidentally there was a power pylon in my street where the power line ended in OpenStreetMap. I continued that line as far was possible. When that power line became visible on the map, the ball kept on rolling. I started recording hiking paths, taking pictures of house numbers, surveying new streets and their names, started mapping land use etc. I was busy filling the empty areas!

Are you using OpenStreetMap yourself?

I have the maps of the whole of Europe on my Garmin Dakota 20 GPS and the Android smartphone, and update them frequently. When we now make a trip with the bus, I often know better where we are than the driver. We no longer travel with car. I also have the ski pistes of Andorra in my pocket. On the smartphone with 32 GB memory, I use OsmAnd, Locus and Oruxmaps. I also tried Vespucci but found it hard to key in the house numbers in full daylight and with sweaty fingers. 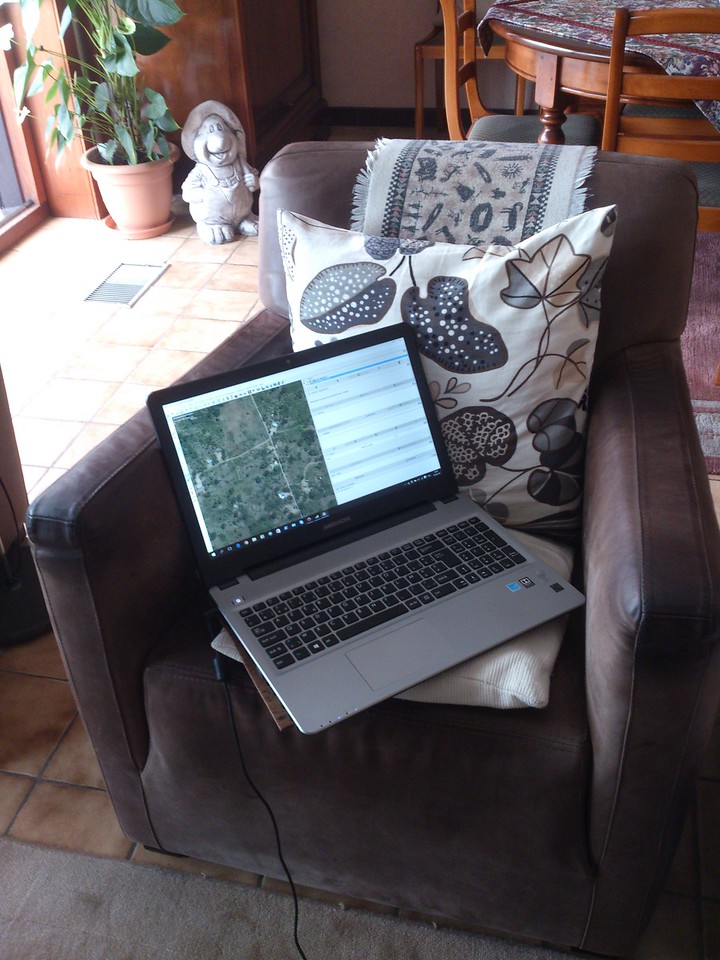 The only mapping I do at the moment is from my lazy chair. As editor I only use JOSM. When JOSM was a memory hog, I switched to other editors, but most problems from the early days are fixed and it contains more and more useful features, a.o. the links to aerial imagery for Flanders. I visited a Missing Maps party in Antwerp, and I also “filled a few squares” when Jorieke recently asked for help for a HOT task. It took some time to adapt. I sometimes have difficulties to follow the rules, but this does not always help the overall quality of the map.

Nowadays we have access to aerial imagery of much better quality. Furthermore we are allowed to use AGIV and CRAB data for house numbers. This is a big improvement compared to the low quality imagery from Bing. I use the tool developed by Sander for importing house numbers. I work mainly around Mol, where I live. I try to improve the houses, streets, land use and house numbers. I keep going until all buildings are mapped. Depending on the weather, it can take from a few weeks to months before I finish a post code area.

I try not to do the same type of mapping for a long period. I also hate relations [associatedStreet relations], especially when I try to fix naming errors.

What is your biggest achievement

That I can keep up (smiles)

The question should have been what is your biggest mistake? The “Q” in JOSM (making square corners) have given my several bad experiences, e.g. when I accidentally selected a residential area without noticing because the whole area is outside the screen. Then during upload, you notice that you have modified thousands of points, but there is no way back. The only way I found so far is to grab the smartphone with OsmAnd and reposition the nodes of the area. This can take several days when it is a complete town or village (note: We have informed him about the reverter plugin for JOSM after reading the first draft of the interview). The good things is that the land uses get updated to the current situation. I also split them in more manageable areas. It is remarkable how many trees have been cut, how many new residential areas are build and how many meadows are used as farmland nowadays. I had similar problem with a high voltage line. That took also quite some time. My apologies when I accidentally removed some tags. The line is now also cut into pieces. I could not find all pylons back, so when you find an isolated one, please remove it. That I did not receive complaints about my mistakes, is a small miracle. I assume others have encountered the same problem, because nowadays the residential areas are mapped with smaller polygons. Or am I mistaken? It would be nice that the “Q”-key in JOSM gets the same warning one receives when a large number of objects is moved. An alternative is a counter that keeps track of the new or updated nodes. This would allow one to avoid large uploads or that one has to throw away a lot of work in case of unrecoverable mistake.

It is nice to walk along the paths that you have mapped before and improve them where needed. (smiles). I support everything open and free for a long time, it is a useful way to spend your spare time and you stay young. This is my form of SUDOKU. Maybe it is also because I want to leave something behind and help humanity a bit. But lets not get philosophical.

Do you do anything else besides mapping?

I frequently read the messages on the mailing list to understand other people’s views, but I no longer plan or maintain anything on the long term. I do admire the work from all the programmers and what they accomplish with the data. But I do not know how they do it.

How can we extend the OpenStreetMap Community?

You should not count too much on the people from my age group, I have tried, but the results were disappointing. The problem is that huge amounts of data have to be entered and that it requires a good knowledge of computers. Most of them find it too difficult to get started. The current group of people that retires will contain more candidates, as they are already familiar with computers. I think we have to look at the students, and point them to the great database that is freely available to them and which they can use to test their skills as a programmer, with one caveat: the data has to be added first.

I did succeed in convincing a geography teacher to give his students a couple of exercises based on OSM, but he’s already retired now. There’s a lot of mailing list activity on http://www.seniorennet.be (note: a social network website for retirees), also about computers and Linux. Maybe some of the younger pensioners among you want to start a mailing list there. But I won’t do that.

What is the strongest feature of OpenStreetMap for you?

That it goes beyond boundaries and helps to improve the world.

What is the biggest challenge for OpenStreetMap?

To stay pure and not attract “pirates”. Luckily it is free and there is no direct gain for hackers. However, I sometimes wonder whether is can be misused when I am mapping in dangerous zones, e.g. in the area of Bamako.

How do you stay on top of OpenStreetMap news?

Years ago, I met Lodde1949, while we both were mapping in Meerhout. He used JOSM and I was using Potlatch, and that had weird results. After mutual agreement, I started mapping elsewhere, but he recommended JOSM to me. “A house in 2 or 3 clicks”. I made the switch to JOSM then, but that was not without effort. Out of curiosity I once visited a Missing Maps party in Antwerp. I also participated in some hangouts. For the rest I do not have a lot of contact with other mappers. I know some around Mol, but they contribute infrequently. 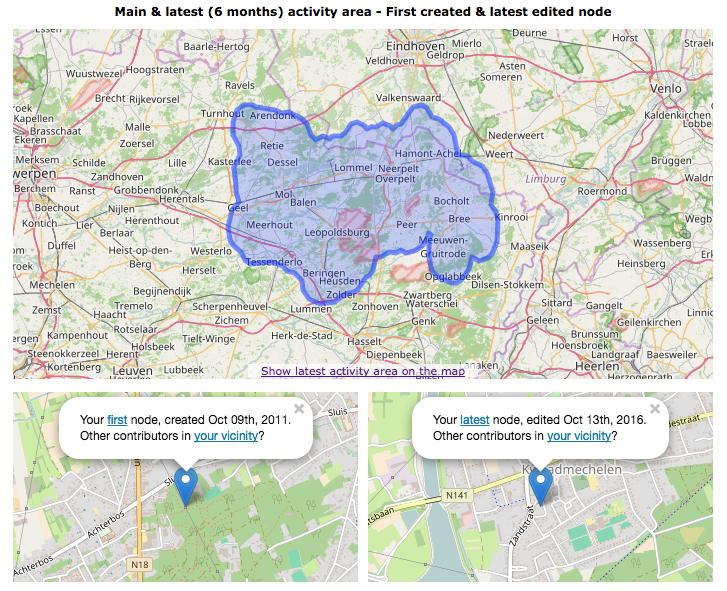 To round up, is there anything else that you want to mention.?

Can I insist that no one simply removes the work of others, even when it is sloppy? Deleting something, might mean that you loose a mapper. The current aerial imagery is much more detailed and better aligned than ever before. Even I have sometimes the tendency to wipe out something and replace it with a new object, because that goes faster. But I will only do that when I have added the item myself. In JOSM, you can easily use CTRL-H (show history) and that might bring back memories. I am sometimes annoyed when I see objects that were added to a sloppy background or details that do not seem useful to me. Why did the mapper not improve the background first? Allez, I am whining again (laughs)