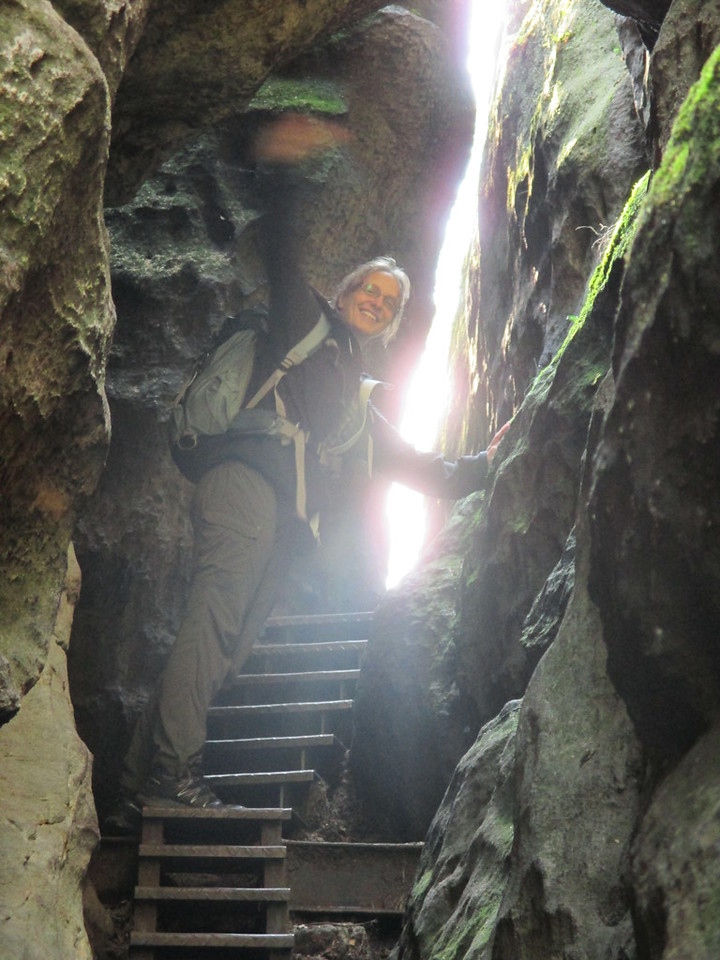 This is a translation of Sarah’s text in German. Any misrepresentation is our fault.

My name is Sarah, I am from Germany and live in Dresden. I studied computer sciences and work fulltime as software developer for a small local company. In OSM I am known as lonvia, which is a word play with the Latin form of ‘long journey’.

Where and when did you discover OpenStreetMap?

In 2008, I read a short article about OSM on the German online-service heise.de, which made me curious. I lived in Switserland back then. Very little of Zurich was mapped, and the rest of Switserland was mostly blank. I spend a complete summer traveling along and mapping a large part of the railway network in Switserland. After that I started with hiking paths. I always loved hiking and it was great to combine the old hobby with the new one. Mapping brought me in places that I would otherwise never have visited for one-day journeys. I walked the complete Jura-Höhenweg, a very beautiful trail which is more sporty than one would expect from a brief look at the map.

In addition to the hiking trails, I prefer to add basic infrastructure: streets, paths, POIs that are interesting for tourists, as well as an occasional address. This has changed little over the years. I add what I would like to find on the map myself.

Lately, I am getting interested in 3D-building mapping. I think that basic building information such as the number of levels is usefull to form a rough idea how a village of neighborhood looks like in reality.

I am a classical outdoor mapper. I used to go out with a photo camera and GPS-tracker and added the information via JOSM. Nowadays, I track with the Android-App OsmTracker. For small improvements, I like to use Android-Editor Vespucci. I use aerial imagery mainly for the final details.

I am a rather impatient mapper. Systematically surveying complete neighborhoods is not my cup of tea, neither are long sessions of armchair mapping such as MapRoullette or HOT-activations. My mapping is a result of travelling and hiking journeys. Nowadays, I only find time to map during holidays.

What is the biggest challenge for a mapper?

Working together on the map. It is often more convenient to maintain your focus strictly on your own interestes and only map for those. However, without a certain regard for the interests and work of the other mappers, this will inevitably end in frustration. It starts with making decisions about tag use and continues through every edit that touches existing data. On top of that, there are a lot of unwritten rules to mapping, which we have developped through years of trail-and-error. They may be obvious to long-term mappers but are not always logical to a new mapper.

I have always been fascinated by maps, but until the arrival of OSM, maps could only be consumed passively. What annoyed me the most, was that there were always two types of maps: on one hand detailed topological maps, with a small scale, and on the other streetmaps, that focussed on car drivers and often left out details that I found interesting. OpenStreetMap offered for the first time the possibility to build maps that I needed: a map that could be used as pedestrian and cyclist that can show the whole picture as well as the smallest detail.

What is the hardest part while mapping?

For me, the most difficult part is to keep the map up-to-date. As long as one is looking at a blank canvas, it is easy to stay motivated to add new elements. Mainly because one sees the next day what one has done. This is less obvious when one walks through a shopping street and updates all shops. This takes a couple of hours work, while the map seemingly did not change.

What are your mapping plans in the near future?

As I already mentioned, I am not the person that plans her mapping projects. As a software developer I am interested in the project that tries to clean up the so called Old-Style-Polygone. These are multi-polygons, where the tags are not on the relation but on the ways that form the polygon. Those areas are difficult interpret by software. Quite often, one has to guess, because the ways contain conflicting information. Currently there are around 200.000 such objects in the database. I think this can be solved rather quickly, when we join forces. This is also a good moment to bring the data up-to-date, as many such areas are a couple of years old. Maybe I will become an armchair mapper for the duration of this project.

When I lived in Switserland, I often went to the Züricher Stammtisch and I was also there when the Schweizer OSM Vereins was founded. In the meantime this became an official Local Chapter. Nowadays, I can occasionally be found at the Dresdner Stammtisch Besides that, I have visited several State of the Map-conferences. With the Swiss Mappers

Do you use OSM yourself?

For day-to-day use I have OsmAnd on my smartphone. At my desktop, I basicly use osm.org for everything that requires a map. For access plans and the like, umap is very usefull.

Do you do anything besides mapping?

I am involved a lot in the software development around OSM. My most important projects are Nominatim, the software behind the searchbox on openstreetmap.org; and waymarkedtrails.org, which is a website that can display all possible routes that are found in OSM.

Furthermore I am a member of OWG, the Working Group, which is responsible for the servers on which OSM run.

Can you tell us a bit more about Nominatim?

I came to Nominatim in 2012, when they were looking for a new administrator for the official server of the OSMF. From that moment, I take care of the server and have become the lead developer for its software. Unfortunately, there are not a lot of other developers. The last few years, the only development that was done was to allow it to keep up with the enormous grow of data in the OSM database.

I started with waymarkedtrails.org, because I needed a map with the hiking trails in Switserland, so I could verify the data that I added myself. Later on, I extended the map to cover the whole world, to motivate other mappers to start mapping routes. That is one of the things that works amazingly well in OSM. As soon as one visualizes data, one finds plenty of mappers that start mapping that kind of data.

In 2012, Guttorm Flatabø from Western Norway Research Institute found out about the map and used the software for a EU-project about tourism. During that project, a mobile version was developed as well as the support for the elevation profiles. We also came up with the name waymarkedtrails during that period as well as the current look and feel of the website.

The Wintersports map and horse riding map were developed together with Michael Spreng and Robert Whittaker.

It might be interesting to note that the map gets more visits from GPSies.com, a German site to visiualize GPS-tracks, than from waymarkedtrails.org.

… and to end … is there something else you want to tell?