I am Anisa, a hackivist, a feminist, an FLOSS enthusiast and contributor from Albania, an agriculture person that through the process discovered that I am really into technology, and mostly Free Software and the ideology behind it. I am a member of Open Labs Hackerspace for 5 years now and also a mapper. I am currently living in Tirana, the capital of Albania. Tirana is a small city if you check it in the map, but yet, really vivid, noisy, and with many things to map. The story behind my nickname is really simple, and actually based on my past. When I was little I used to live in Greece with my family so my OSM nickname is actually my real name, but written in Greek. Regarding my hobbies, oh that’s a bit complicated, but to sum up, I like outdoor activities and exploring new things.

In the hackerspace where I am also part of, we have this ideology of sharing knowledge, so my first introduction to OSM was from a fellow member of the hackerspace, who not only introduced me to this great project, but also helped me to learn how to edit and gave me the first tips on how to contribute to the map. Now, it is so good to see that there are many other new people joining the project and contributing. We are growing day by day.

I have mostly mapped areas that I have a connection with, for example my birth city, since I do remember or know what to map. I try to map it as much as I can. I have noticed that Delvina is mostly mapped by foreigners and I try to map things that usually locals know better.

Usually I map the city I am currently living, my neighborhood, or maybe streets that I cross too often. Since Tirana is a city that is under constant development, things change day to day, so there are always new things to map and not so many contributors yet.

Actually, my mapping activity depends on my daily life routine, there are periods that I am active and map for a long time, there are times when I contribute in other ways rather than armchair mapping, like organizing events together with other members in the hackerspace or giving talks in different events regarding OpenStreetMap.

I believe that in such kind of projects its not only important to map individually but also to share your knowledge and make the community grow, so there are more and more people who work all together with the same goal and build the map voluntarily, but also develop tools to improve the map, maintain wikis, be active in mailing lists, translate apps in local languages, makes surveys, organize small mapathons to teach other people what you know.

There are so many ways to contribute.

As for mapping, I use the ID editor and/or JOSM. Since I have a full personal agenda, I am in constant movement all day long, so I map a lot using my phone. So far I have used Maps.me and lately trying CityzenApp. I use them mostly to map areas that I know quite good so the edits I do are based on my ground knowledge (as being a local). I try to add information whenever it’s missing from points-of-interest, in order to complete the information. Sometimes to make it more diverse, I map unknown places, and try to focus on rural areas around Albania since they are poorly mapped.

Haven’t mapped for HOT yet but in Albania there are needs to use HOT, for example in the north, every winter hundreds of families are stuck between the mountains running out of essential things to survive (such as food or warm clothes) because of the snow, and there are no ways to enter these areas, it’s hard even for emergency help to reach them. We need a Humanitarian OSM Team to map these areas.

As mentioned, in our hackerspace and community its really important to share our knowledge, so my biggest achievement as a mapper is sharing everything I have learnt with other people. Being able to make a small difference and trying to teach people all the information I have gained so far. The last few weeks as part of a project, I went in a small city in the north of Albania with fellow members from the hackerspace and had several intensive workshops (4-5 hours per day) about Wikipedia and OSM with 13-15 year old students. It was such a great feeling to teach and help them through their first steps as new mappers, and watching them happily improving their city in OSM.

I would definitely enjoy doing this again. 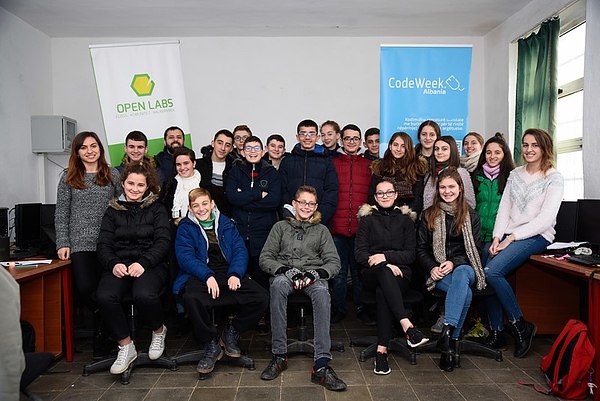 As I mentioned I’m a FLOSS enthusiast, so contributing in such projects is something I enjoy, I have contributed to many projects but so far OSM is the one I enjoy the most, not only because mapping can be really fun, but also because of the horizontal structure that the project itself has and the way it works.

OSM is the real example of collaboration, people do not only edit on their own, but also correct other people’s edits that need improvement. And the biggest motivation so far has been getting to know a small part of the community in person, when I participated in SOTM 2017 last august (the annual gathering of OSM enthusiasts). It was my first introduction to so many people from the community and I was thrilled to find such a kind and welcoming community and environment, and also find out how many subprojects OSM includes. There are around 4 billion users and hopefully contributors as well around the globe, isn’t that amazing, how huge this project is?!

Personally, I haven’t experienced any issues or difficulties so far, I think everything can be learned if you are into it, and from my point of view it’s very user friendly and easy to get into.

A few weeks ago Open Labs and the Municipality of Tirana signed an agreement that data from the municipality can be used to improve OpenStreetMap. This includes datasets with buildings and street information. After signing the agreement we have to add all the information provided by the municipality in OSM, and that requires time and a good team to work with, so the plan is to teach other community members how to add the data using a tool which is called the Geoportal and makes the import process easier. That’s the main plan at the moment.

The first OSM community I have met is OSM Belgium. Later on, I met people from almost every other community in the world, so now I have contacts and friends from all of these communities.

Also, different events and conferences are an excellent recourse of getting to know new people and new OSM contributors, so we can share knowledge and also learn things we didn’t know before. Mapping is such a wide topic, there are always new things to learn, and that’s what makes it more fun.

As I mentioned previously, mapping is one of my hobbies and having said this, that’s definitely one of the things that I do with pleasure, I am not only a mapper, but a happy user as well. I use OSM based apps to find myself around when I travel and so far it has worked pretty well. 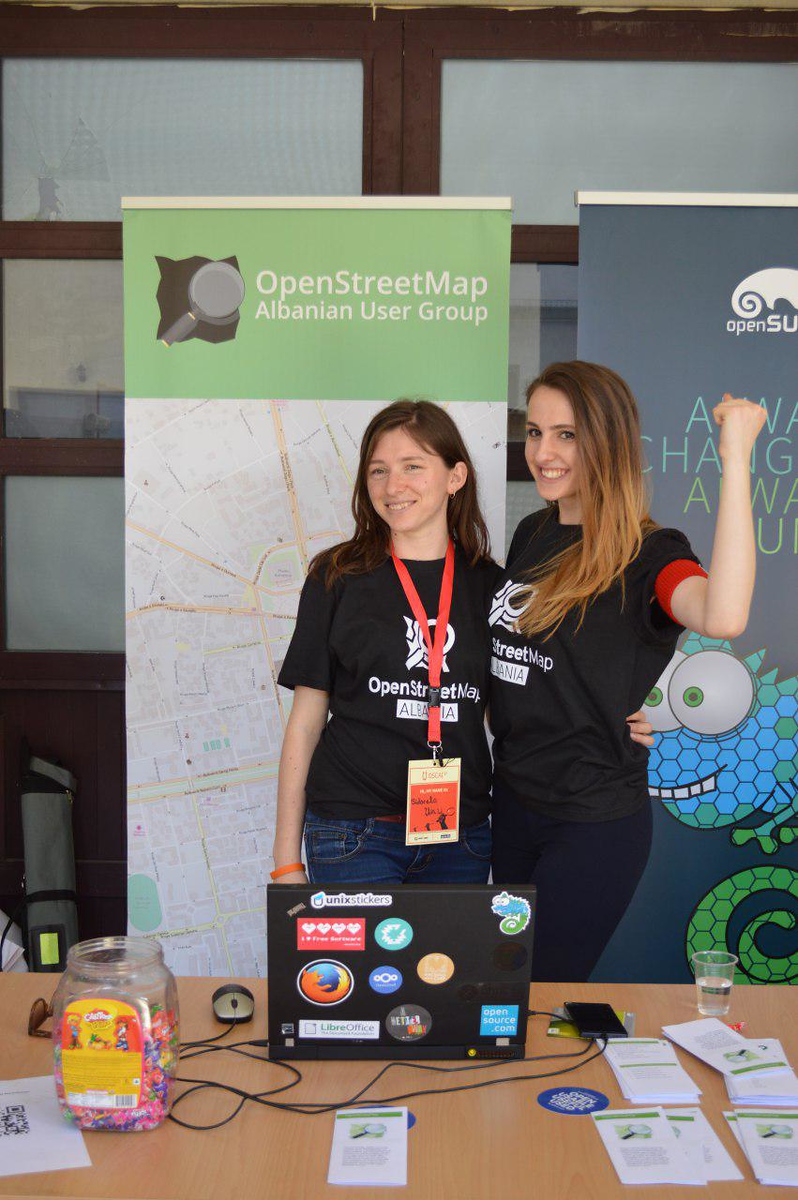 As I said, I think there are many ways to contribute, from maintaining online infrastructure, translating, offline events, to promoting the project. I try to do a bit of all these things. Beside all the things I previously mentioned about OpenStreetMap, I am a member of Open Labs Hackerspace, which means that all of us try to do as much as we can to keep our local community healthy and also contribute to it in other FLOSS technologies. I have been a Mozilla contribution and Wikipedia contributor as well. I am part of the Debian community, I am co-organizer of one of the biggest Open Source Conferences In Balkans (OSCAL) and in parallel I am also a co-organizer in other events happening in the hackerspace.

One of the other topics that I have been lately very interested to know, is Open Agriculture, Food Computer. I study Agriculture and Food Computer sounds to me like an amazing project to get involved in, which I assume will become a thing in the next couple of years.

Can you tell a bit more about the Hackerspace?

We organize different events, hackathons, editathons regarding everything that’s free and open source. There are around 250 small events happening every year and a big one (OSCAL), the annual conference where we include all the projects Open Labs supports. In total are around 30 official members, but during events there might be around 100 people coming and participating, and during OSCAL around 400 people participating and 70 speakers coming from all over the world.

Hopefully in the future we will see more initiatives from OpenStreetMap regarding the diversity in the project, because I think that the level of involvement of women or people from underrepresented groups in mapping are not at the level that we all would like to see it. 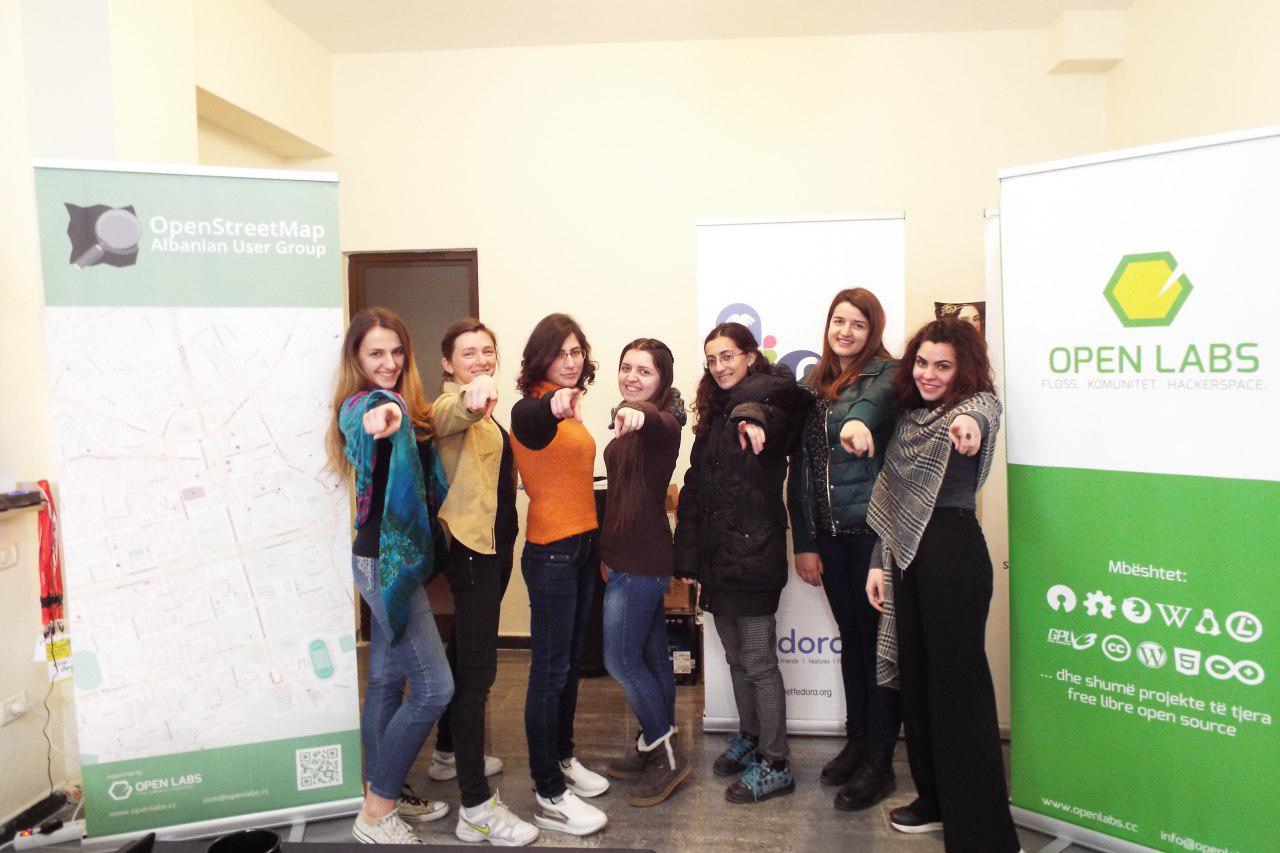 And I encourage everyone to start contributing and mapping, a small contribution from everyone makes a big difference to the global map.