My name is David Morais Ferreira, I was born and raised in Luxembourg and I am currently finishing my master’s in Germany.

As many people do, I stumbled upon OpenStreetMap while looking for a map I could use for hiking and geocaching on my smartphone without having to pay for a mobile data plan. Then in 2017 I decided to create an account to contribute back to the map I had been using and relying on for so long.

After familiarizing myself with the concepts by mapping buildings and roads for Humanitarian OpenStreetMap Team, I moved on to mapping features closer to my area. I then realized that I am mainly interested in data that is relevant to the “every day” use of OSM, i.e. addresses, building outlines, highways and POI’s.

In my current mapping effort, I am focusing on improving the map in Luxembourg. In preparation for the import of an open data address dataset that covers all of Luxembourg, I have been updating building outlines, undoing concatenated addresses and updating road names.

I must admit that I am somewhat of an armchair mapper. If I happen to see a POI that is not on OSM, I’ll write it down and add it when I’m back home. However, I spend most of my time working with open data that can be imported into OSM. I use JOSM when mapping.

As previously stated, I am currently mapping in Luxembourg, as I believe that the majority of missing addresses can be imported relatively easy. Given that my family emigrated from Portugal, I also am interested in the state of the Portuguese Map. Unfortunately, the lack of open data datasets makes it nearly impossible to improve the Portuguese map from far away.

I’d have to say the “Chargy Luxembourg” charging stations import that increased the mapped charging stations from 24 to approximatively 160! In the future, this number is supposed to increase significantly, as there is a big push in Luxembourg to promote electric vehicles.

After noticing that Luxembourg is covered in stale notes and fixme tags, I have decided to attempt to improve the situation. As of this interview, I have closed about 140 notes. 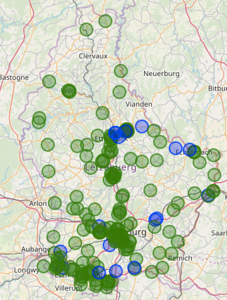 For fun, obviously! I strongly believe in participating in collaborative and open source projects such as OpenStreetMap.

Getting started is actually not that hard, as the iD Editor makes it rather simple. However, once you are ready to tackle bigger challenges, knowledge of keys and common practices makes mapping more difficult. Luckily the OSM Wiki provides an excellent resource.

In the near future I would like to plan out the address import process, define a timeline and get approval to get started. I would also like to further reduce the number of notes and fixme tags in Luxembourg.

In the distant future, I would love to import the village names and boundaries in Portugal, as many are currently missing from OpenStreetMap.

I haven’t attended OpenStreetMap events yet, but I hope to change that in the near future! I communicate with other mappers on IRC, where I can be found in the following channels: #osm, #osm-pt, #osm-de and #osm-fr.

I do! I use OsmAnd quite often when travelling to new places or when I’m outside searching for Geocaches.

Don’t be afraid to ask questions if you are unsure about something. Happy mapping!